About the Course Module 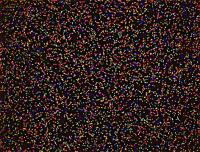 This module explains why DNA sequencing information is important for the biological sciences. It provides a brief description of the technical challenges of DNA sequencing. Students learn the basic principles of sequencing-by-synthesis, which is a widely used next-generation sequencing (NGS) technology. Students will do an online activity that simulates sequencing strings of DNA.

More About the Discussion Questions

Review the Process of DNA Sequencing

2.  G will pair with C; the spot will light up yellow

5.  Red indicates A, and A pairs to T—so the unknown nucleotide must be a T

6.  Two strings (the ones that are blue); because they paired with T, the strings must each have an A.

Putting It All Together

To make this activity easier, provide a datasheet that depicts the flow cell and outlines the spatial positions of each string. Also, you can modify the sheet so that students have the exact needed number of copies of the datasheet to fill out in order to take them through the five cycles (multiplied by four colors = 20 copies of the flow cell to record the colors as they sequence the strings).

Answers to the last slide in the Challenge

a) Five spatial positions, which means there were five strings (each position is a clump of copies of a single string)

b) Five cycles, which means that it sequenced five bases along each of the 5 strings

c) The color sequence gives you the nucleotides that paired with the bases on the unknown strings. Because of base-pairing rules, when you know which color is attached to which base, you can figure out the identity of the unknown nucleotide the colored base paired with.

The solution to the sequence of the strings can be viewed here (PDF).